John Leo Brumley the carpenter was my grandfather.  He was a hardworking man that provided for his family in the toughest of times. He grew up in tough times so he was well prepared for what was to come in his life.

He was born on November 26, 1895, in Dixon, Pulaski, Missouri. He was the first son born to Isaac Walter Brumley and Katherine (Katie) Cox. His other siblings were William Ralph, Thomas Clinton, Nancy Beatrice, Henry Elmer, and Walter Willis Brumley.

They lived in Vienna, Maries, Missouri in 1897 when his brother William Ralph was born. In 1899 when Thomas Clinton was born they were in Osage County. Nancy Beatrice 1901 and Henry Elmer Raymond 1907 were also born in the same county. They were living in Pulaski County, Missouri when Walter Willis was born in 1908.

John was only sixteen years old, when his mother, Nancy Katherine Cox Brumley died of Pellagra in 1912. This left his father, Isaac Walter with five children to take care of and raise. John, William, and Thomas were old enough to seek employment to help the family’s finances. Nancy also decided to take out on her own as well, but Henry and Walter were left with other families so their father could go to work with the railroad to earn a living.

He enlisted on July 1, 1915, in the 2nd Regiment Company K, Missouri National Guard. He was stationed at Camp Laredo, Texas on the Mexican border when he was injured in a non-military accident. He was patrolling the Mexican Border in Texas when a spear cactus pierced him in the right leg just below his knee. He had to have surgery to take care of the infection and was discharged because of his disability after serving only eighteen days.  He mustered out of service on January 13, 1917, because of the non-military accident. 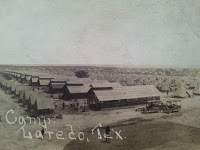 John was living with his father Walter in Baxter Springs, Kansas when WW I broke out and he had to register with the local Draft Board. He gave the information that he had been a Private First Class in the Infantry and had served 3 years prior to WWI.

In the 1920 Census, my grandfather was living with his brother William in Springfield, Greene, Missouri and working as a common laborer. It was at this time that he meant my grandmother, Nellie Opal Sells of Springfield. Their courtship was a whirlwind and on March 20, 1920, they were married in Kansas City, Wyandotte, Kansas.

My grandfather was a union carpenter by trade and worked on several projects in Kansas City, Wyandotte, Kansas. The Great Depression of the 1930’s came along work drastically slowed down and eventually no jobs were available. My mother told me the stories how he would have to go downtown and stand in “the bread line” for any food he could get for his family.

My mother and her siblings grew up in various neighborhoods in Kansas City, Kansas, and my grandparents lived the remainder of their lives there. My mother told me stories about the Strawberry Hill community where people came from Croatia, Ireland, Germany, and many other countries to live and thrive. They all got along because they all had the common thread of living and working in the United States to better themselves and their families.

I enjoyed visiting them every summer and to hear the stories they had to tell of when they were young and living in Kansas City, Kansas. They once had a house with a big porch along with a porch swing, we would sit and swing on hot summer days watching the people go by and talking about the place they called home.

He worked as long as he could in odd carpentry jobs around the city. He was prone to getting blood poisoning if he was hurt on the job. Finally, he had to give up carpentry altogether.

My grandmother, Nellie Opal Sells Brumley died in 1965 and John lived in the city until his health began to fail. He then moved to Olathe, Johnson, Kansas to a nursing home, where he could be closer to his children that were caring for him.  John Leo Brumley died May 29, 1976, at the age of 80 years old. They are both buried at Highland Cemetery in Kansas City, Kansas.

I have started my blog up again and have updates on my favorite posts. If you enjoyed reading this please pass this along to family and friends. If you have additional information to add about my family member please contact me.

This site uses Akismet to reduce spam. Learn how your comment data is processed.